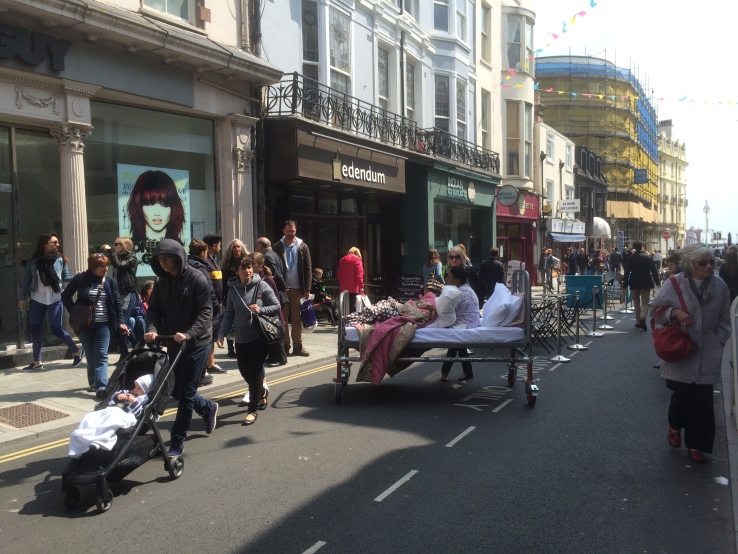 ‘Space reserved for being serious is hard to come by in a modern society, whose chief model of public space is the mega-store (which may also be an airport or a museum)”

So we’re back together again sitting around the office table eating delicious rhubarb cake. Its over a week since the first performances of BED at the Brighton Festival and we are sifting through the pieces, percolating audience responses, trying to unpick the elements of performance that transformed so many passers-by into audience or one on one confidents.

In a period of eight hours across two days over ten thousand people walked passed the beds. There was such a huge range of responses:

“I was on my way to a shop and I wondered why that lady was lying in a bed. So it just immediately attracted me to ask her what’s that all about. She just told me a story and showed me a picture when she was younger and she had a baby and the baby had been taken away from her. I started to ask her some questions because I wasn’t really sure…it’s quite intriguing …is this a story, is this real, or are you here for a reason?”

“You explore many things with it don’t you. Cos its quite dramatic when you see somebody lying on a bed in the high street. What’s that all about? It gets people thinking. I asked her if she was mobile. I thought she might be someone who was bought here for the day. Cos you just never know what people can do. You hear so many stories now like people taking horses into hospitals. I was impressed with it.” 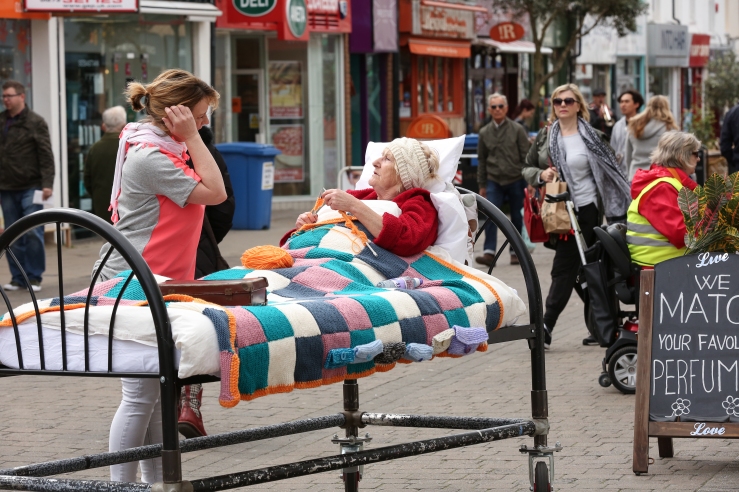 “It’s very intriguing. Is some one ill? Has someone got their bed out? At first I was panicking and then I realised it was the festival. When I saw the first bed: how did she get there? I was worried about her. But its very interesting. Everyone stopped. Everyone stopping and looking. I love old people. I was very close to my gran. It gives people a chance to talk to old people. You just ignore them don’t you. Just go walking past. It allows you to pay attention and ask questions. It’s a really wonderful idea.”

“I was quite struck. I didn’t know if there was a real human being inside the bed or not. I was a bit scared or a bit hesitant to come closer and see it. I wasn’t sure… is it a protest? Is it art? It was just there in the middle of the road. There wasn’t a sign so I assumed art. It’s definitely effective.”

“I found it moving that she was so exposing of her personal life. That’s very vulnerable lying out there in a bed. Even though its theatre it’s a statement of vulnerability. Very exposing.  It’s very exposing and the lovely thing was the courage.”

“You know what? I’m going to visit my grandmother this afternoon. I don’t see her often enough…”

2 thoughts on “Talking with audiences”