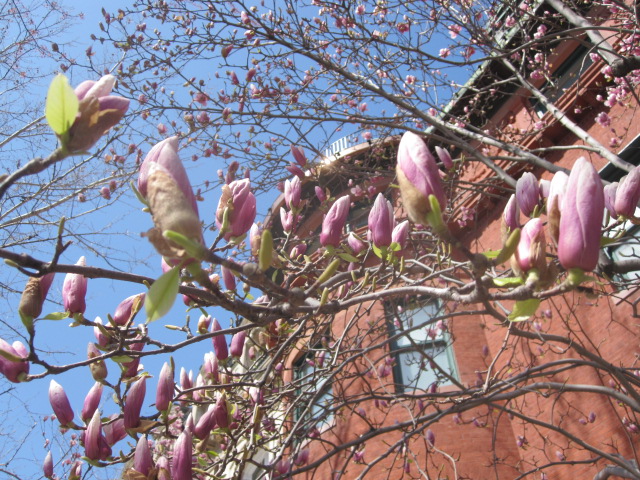 The question was written on the board leaning against the street herbalists table on the junction between Wayne and Colleville just outside Silver Spring Metro: “How do you be come a good human been?” The text on a wall in the Phillips Collection nr the Dupont Circle offered a curatorial response: “ a mixture of passion and deliberation”.  Thoughout my travels a phrase from a snatched conversation in London the Child Mental Health Specialist, Nancy Secchi keeps bubbling up. “It’s quite simple really”, she said, “all that we need is to be recognized and understood.”

I’m having a drink in the late afternoon sun in Bethesda with musician and dancer Anthony Hyatt. Spring has arrived in DC and its environs. All of the Magnolias are in bloom, the American robins are going crazy. I’ve only met him a couple of times but I think Anthony makes a strong contender for the position of ‘good human been’. Among his many jobs he is an artist in residence at a number of hospitals in the DC area.

‘I was working at the Veteran’s Hospital. They were mostly men. A lot of them were older. Some had been in World War Two. There were Korean War Veterans and some from Vietnam. Increasingly I’d see younger men. There was this one guy working out with a physical therapist learning how to walk again. And it was very difficult. He had one person behind him and another at his side and he was trying to walk across the room and he saw me with my case and he asked me about it. “Is it some kind of instrument?” I told him it was a violin. I said : “Would you like me to play you a song while you’re doing your walking?” He said: “Yes”. I took out my violin and I started to play.

And he used the rhythm. I kind of connected to him on a rhythmic basis and he walked all the way across the room. And he sat down. He was tired. I chatted to him. I said I had to go. There was a group waiting for me. I asked if he wanted to join the group I was leading, my typical programme is an hour long. So he joined. About half way through the session he came over and asked me if I knew a particular song. I didn’t. It was a love song. I looked in my books and I sight-read it to him. Well he sang it. He sang along with me.

Afterwards I was saying goodbye to each person. And this man just held my hand. He looks into my eyes. “No. Thank you. I don’t think you really understand. I am really saying thank you.” And I said “Well I am glad I could be here”

1 thought on “Wandering and Wondering in Washington DC”