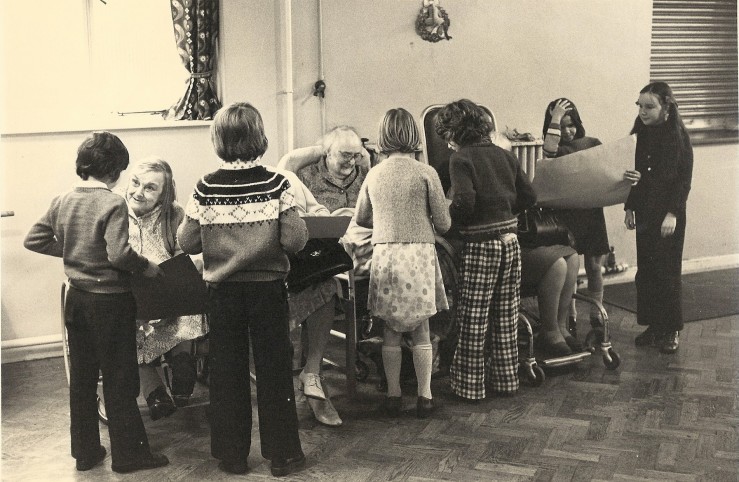 The storm will soon we over. We have anchored in the harbour. We are sailing on the ocean to a port beyond the sea”. He just sat and repeated these lines over and over.

It used to be the workhouse. The Ford Workhouse and for many people living in the neighbourhood it still carried that stigma. You didn’t want to end up there when you were old. We spent several weeks visiting. Getting to know some of the residents.  Chatting to them about family, about memories, mainly feeling awkward and embarrassed. There was a great deal of suspicion. We were not the first to arrive with good intentions and promises only to disappear and never be seen again.

The photograph captures a moment towards the end of project. (Our project, their lives) We made a short piece of theatre with six and seven year-olds from the neighbouring junior school. The school was only two hundred yards away from the home but it could have been a universe away. On this particular Friday afternoon the two groups came together. The children performed to the older people. The performance was clumsy, the children were awed by the situation they found themselves in. After the show they shared paintings they had made of the story and it was here, in this unrehearsed exchange, that the moment happened, an ordinary connection between young and old. It felt that all that had happened before was just an excuse to enable this point of connection.

We visited again a couple of days later. One of the card players had died. We sang some songs, told some jokes and toured around the day rooms saying goodbye. We promised to be back.

“We wont see you no more”, said Rosie.